I met Carol in April of 2011. It was the start of the college search for Oona in the spring of her junior year of High School. We had scheduled time for an interview for a summer internship at Heather Ridge Farm where animals are lovingly raised on pastures and they operate the Bees Knees Cafe which serves “fiercely local” and delicious food. A tall woman with beautiful curly hair cut in a pert bob and a wide smile welcomed us at the door of the old farmhouse that serves as the café and farm store. All the while smiling, she sat Oona down at one of the tables in the Bees Knees Café for her interview while I made myself scarce in the farm store. After the interview Carol invited us to visit the barn where the spring lambing season was underway. Farmer John (why are there so many farmers named John?) showed us around the maternity ward where we saw a newly born lamb still wet from birth.

Carol and John feed us with both the food they grow and their friendship. They give us advice about things that city folk don’t know about such as goat fencing. When Hurricane Irene devastated the area in August of 2011 and the roads off the mountain were washed away and the town was flooded, we ate their beef and chicken. They serve seasonal food, everything has its time and place. The following spring, again in April, I stopped by after driving up from the city on a Saturday afternoon for lunch. It was a week after the funeral of my only brother and I’d driven up to the trailer by myself just to get away and dig in the dirt. Carol served me up a bowl of Nettle soup. I’d never seen anything like it. It was an intense green and creamy, thick and very hot. On a small plate was a slice of homemade Irish bread smeared with the yellowest butter I’d ever seen. It was a grey day and I looked out of the farmhouse window to the view of the mountains shrouded in mist. The green soup warmed me to my toes. Its warmth was as soothing as a mother’s fingertips on your brow. The green soup was spring itself. 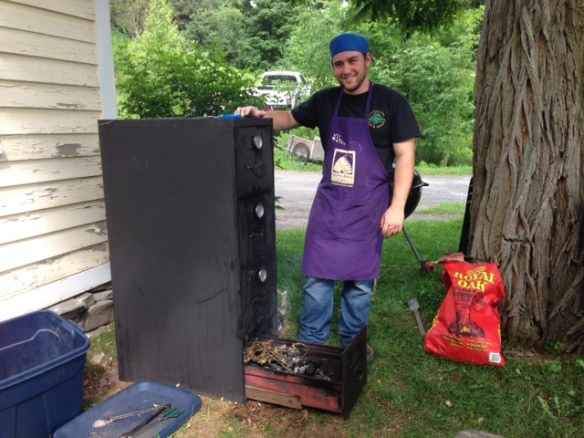