I love making something out of nothing. So I really like to compost. It makes me feel good to make use of trash – I like the crumbly black compost it produces and how my plants love it. Frank made me this compost system at our rural homestead out of found pieces of junk. The previous land owner worked in a school cafeteria and we found lots of these dinnerware racks for industrial type dishwashers. The racks worked out well for the compost bins, allowing for air circulation while being strong enough to hold up through winter snowstorms. Frank added found scraps of fencing and made it all sturdy with 2 by 4’s and rocks. 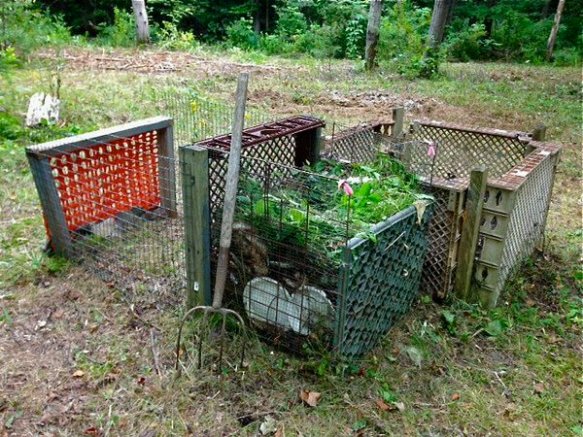 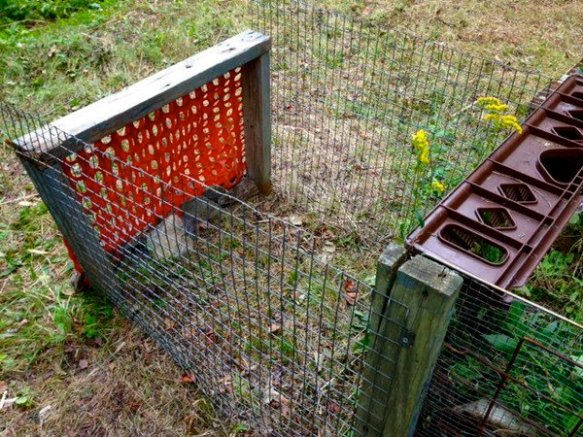 new section made of found materials

Last fall, I went to a workshop during the 1st Annual Harvest Arts Festival in the community gardens of Loisaida. It was a workshop on the Bokashi method of composting taught by gardeners at the Children’s Garden on Avenue B and East 12th St. They reported that they’ve increased their production of compost manyfold and are now producing tons of compost annually. They also told us that apparently rats hate the Bokashi waste and don’t come around their garden anymore. I was sold when they stuck a pitchfork into a random section of garden path and revealed black loamy soil teeming with earthworms.

Bokashi is a Japanese term meaning “fermented organic matter”. Effective Microorganisms (beneficial microbes) are inoculated into a medium such as bran laced with molasses. This inoculated bran is then sprinkled onto food waste in a bucket then sealed airtight for about two weeks. The result is the fermentation of your food scraps that are teeming with good bacteria. The Bokashi’ed food waste can be buried near your plants to fertilize and improve the soil or added to your compost bin in order to super speed up the making of compost.

This summer I started my Bokashi composting with a bucket system in my apartment. They say that you can add meat and dairy to a Bokashi bucket since the fermentation will pickle the waste instead of rotting it. I don’t choose to do that. We put in only vegetable and fruit scraps, leftover rice or bread and the occasional cheese rind. After you put in some scraps, you sprinkle on the inoculated bran and seal the bucket. I keep doing that until it is full and then I let it sit for two weeks. It does not stink. It has as sour, yeasty smell, but it is definitely not rot. I then add it to my compost bin. The microorganisms turbo-charge the making of compost. When I turn my pile, the smell of earth and fertilizing matter is rich and heady. Obese earthworms swirl around my pitchfork.

I got my starter kit of inoculated bran and Bokashi buckets from Teraganix. I like the plastic covers that come with the buckets because they are very easy to get on and off. Some folks say that you should have a bucket with a spigot in order to drain off liquid every other day, but I don’t do this and I don’t have an overly soggy bucket.

millie just loves to sit in the herb garden. compost gold ready to be worked into the soil.

This past weekend I shoveled out my finished compost and worked it into the garden beds so that in springtime the soil will be prime for planting. Over the winter, I will bring my pickled food scraps to our community garden’s compost bins. And I will keep on making something out of trash.

Teraganix has a blog and video in addition to supplies

Compost Guy – a great site for all things compost