The first days of autumn in New York City are still balmy even though you can spot a yellowish tinge on the leaves of the street trees and it is now dusk at 7 o’clock. When its not hot I like to ride my bike to work the long way, all the  way around the southern tip of the island instead of the quick way straight across from east to west. It’s easy to forget that Manhattan is an island because it is so dense with people and buildings from edge to edge. On the morning of 9/11 as I was shepherding the children home, through the shock and fear in the streets, we passed a cluster of people gathered around a parked car listening to the radio for news, when a woman shouted “they’ve closed all the bridges and tunnels to and from the island” and I thought “we are trapped”. After that, I’ve never forgotten that we live on an island.

My bike commute starts on the eastern edge of the island where the East River looks over to Brooklyn. In the old days, they say that the river froze so solid that people could walk over the ice from Brooklyn to Manhattan. They say that entrepreneurs  sold hot potatoes on the icy river to commuters. The workers carried the potatoes in their pockets to warm their hands on their trek across the iced over river and then have the roasted potatoes for breakfast. 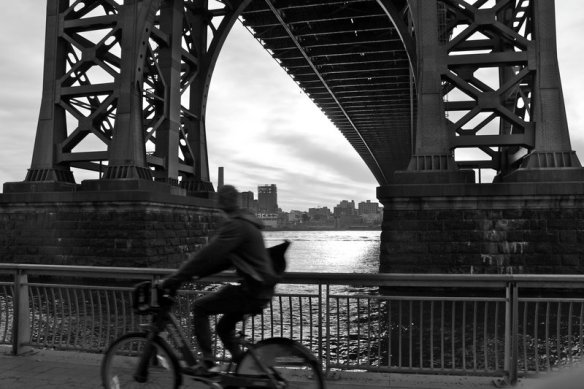 As you ride on the paths of the East River Park you pass many sports fields. You can smell the salt in the air and the morning sunlight sparkles on the water. It is much cleaner now and you can catch glimpses of ducks and other water birds living there. As you hit the eastern edge of Chinatown by the river, you see clusters of Chinese seniors practicing Tai Chi and exercising in the park near the South Street Seaport. Fishermen in baseball caps line the railings with long poles in their hands.

You hit a wall of commuters getting off the Staten Island Ferry and subways as you round the southern most tip of the island and move from East River to the Hudson on the West Side.

At this point, I ride on the sidewalk dodging the walkers and taking care not the scare them. They have enough stress. To ride in the street here is dicey because they are curvy and packed with speeding commuter buses bringing in Wall St. workers from the land of suburbia.

Once you cross the street at the tip of the island at Battery Park, you can get on the West Side bike lane north and now you ride along side a different river – the Hudson. 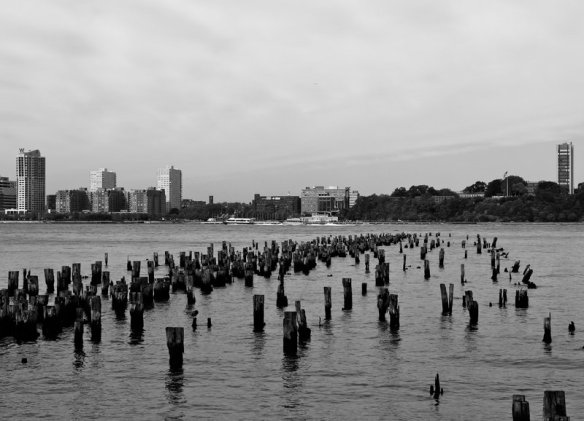 Remnants of an old pier on the Hudson River

I’m afraid of traffic. Because of fear, I didn’t learn to drive a car until I was forty. Whenever I have to drive to go upstate, I leave at five in the morning so I can avoid the traffic leaving the city. I white-knuckle it all the way up the FDR drive while listening to happy Motown music to soothe my nerves. So I decided that maybe riding a bike in the streets to work and back would dull some of that fear. A friend thought I was nuts, “Okay now, so because you’re afraid to drive, you are going to ride a bike in the streets of New York?”

The first time I rode a bike in NYC was during the blackout of August 2004 in search of food and adventure. The lights had gone out the afternoon before and that night the mood was festive in Loisaida. In Tompkins Square Park, people were dancing around bonfires. It was a balmy night, not too hot. In front of my building, a cluster of neighbors sat on beach chairs around a camping lantern and drank wine from Dixie cups. We swayed to the sound of the African drums coming from park.

By noon the next day, we were bored and hungry. I let Frank talk me into riding a bike over to the west side. I agreed because since the traffic lights weren’t working, the streets were devoid of cars. I hopped on one of my daughter’s bikes. It had a banana seat and high handlebars, just like the bike I had when I was a teenager. We rode all the way crosstown, from the East River to the Hudson. It was exhilarating to ride on the empty streets with my hair blowing in the breeze.

The bike lanes that started cropping up in the neighborhood got me to thinking I could do it again and now I ride my bike everywhere I can. I like knowing how long it will take me to get somewhere without being dependent on the arrival of trains or buses or fighting the crowds for a cab. I like the freedom of going here and there on my own. Bike commuting has saved me thousands of dollars. And it has helped lessen my fear of driving a car. Here are some things this cowardly cyclist has learned on these mean streets.

The #1 safety advice is: Be predictable and be visible.

Frank gave me the most logical and reassuring advice: “If you are in a spot where the traffic is aggressive, just get off the bike and walk it on the sidewalk till you get past the scary spot. Don’t soldier on.”

I wear a helmet – always. I do not want to end up a vegetable and burden my family with feeling like they have to visit me every weekend in a nursing home.

Don’t underestimate the determination and skill of bike thieves in New York City. It’s not for nothing that there is a bike lock named “fuggedaboutit”. Much as I might like that twee brass bike bell, it will call attention to my bike. I always lock it tight – both wheels and the frame. The seat is chained down and screwed into the frame. A thief will not risk spending time cutting your bike loose if it is not expensive and you’ve made it time consuming for them to try. They will bypass it in search of easier or more lucrative pickings.

As for drivers, I find cabbies to be the most careful – they know what to do. Be careful of drivers with Jersey plates out on a good weather Saturday, they don’t know how to drive with cyclists on the streets. Be wary around box trucks. Scariest of all are the death machines that are private garbage trucks – do not underestimate them.

When a pedestrian bumbles into the bike lane without looking (which happens a lot), the bike bell only works about 50% of the time in getting their attention. I find that shouting “Yo, heads up!” gets the best response. It’s a polite way of saying “Get the fuck out of the road”, but they think you are being helpful and usually move out of the way with a smile.

Don’t be an asshole and ride the wrong way on a one-way street and then make it worse by pushing the cyclist who is going the right way into car traffic.

Sometimes when you are bearing down on a pedestrian who is where they should not be, they get nervous and do a little backwards and forwards dance like a squirrel in the road so that you don’t know which way to aim your bike to avoid hitting them. I treat them like I would a dumb pigeon – I slow down and let them make their move.

my purple Schwinn, purchased at Recycle-a-Bicycle on Loisaida Ave.

I can smell the cold when I step outside. The clean and brittle smell carries the smoke of the wood fire that heats a church on my block. The winter scent wakes me up more than the cold itself. I touch the cold metal of locks and free my bike.

I only started riding a bike in New York City a year and a half ago. I’d always been too chicken to ride in the street before. With the proliferation of bike lanes, I bought a bike from my neighborhood shop Recyle-a-Bicycle and started bike commuting to my office. Now you can’t get me off it. Only a downpour will get me back onto the slow and jammed-packed crosstown bus.

I’ve discovered the trick to being comfortable is to keep the feet, neck and especially the hands warm. I wear an ample wool cowl that I knit myself that you can pull up to cover your face in the biting wind. You can get the free pattern here in the post Winter Knits for Biking.

I wear double gloves, but in the warm hands department, these win. The food delivery guys have developed an ingenious system of using plastic bottles and bags to block the wind from the handlebars. Maybe soon we will see fancy versions of these contraptions for sale in the high-end bike shops. 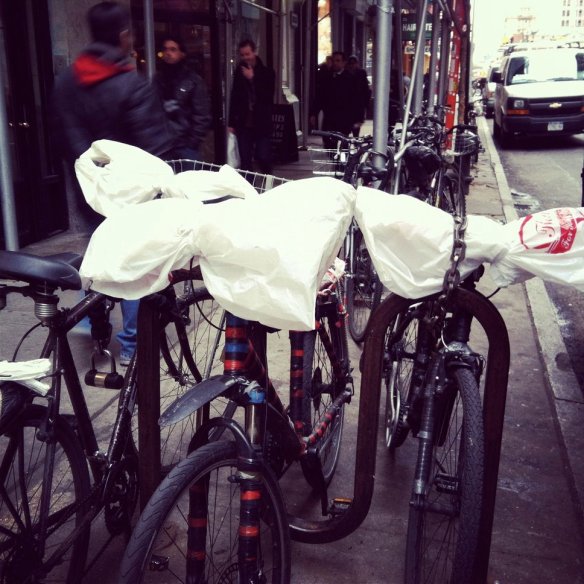