November 1 – we are still without power and so we are at a friend’s house in Brooklyn to take a hot shower, charge all our gadgets, buy food & ice and communicate with friends and family. Below is what I wrote on October 30th that I am able to post now because I’m finally connected (for the afternoon at least).

The day after Hurricane Sandy and I’m sitting at the marble dining room table writing by the light of two candles. All I’m going to do is describe the scene. This morning I heard from neighbors that we could be a week without power. A black-out in New York City is a big deal because there are so many people so close to each other and anything can happen.

Outside, I can hear sirens from different city departments, one was a fire truck and one something else. I hear no voices outside at all which is very unusual as it is only 8pm and a warm dry night. It feels very dark without the street lights on, but it’s really not. The sky is a milky grey color. Maybe the clouds are reflecting lights from parts of the city to the north and the south that have power still. Or maybe it is the full moon. In the building across the street some of the windows are illuminated with candlelight, others with the silver light of a camping lantern. Sometimes you can see the swishing of light from a flashlight as the inhabitants walk from room to room.

There are many trees down in the neighborhood. Loisaida Avenue (Avenue C) flooded last night during the storm. The water came in from the lowest point at 14th St. They said it reached 6th Street and was thigh high. This morning all along the avenue, I saw people pumping out water from their basements with generators that somehow miraculously appeared. I mean, who thinks they need a gas generator in Manhattan?

Massive weeping willow down 6B garden 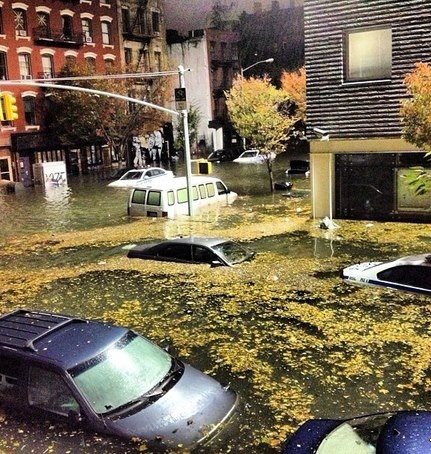 Loisaida Ave after the flood

Loisaida Ave after the flood water 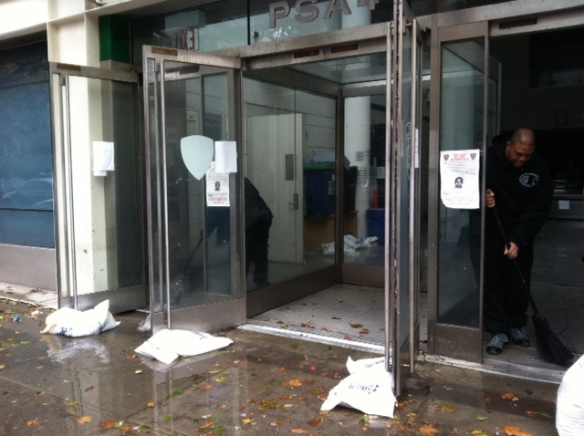 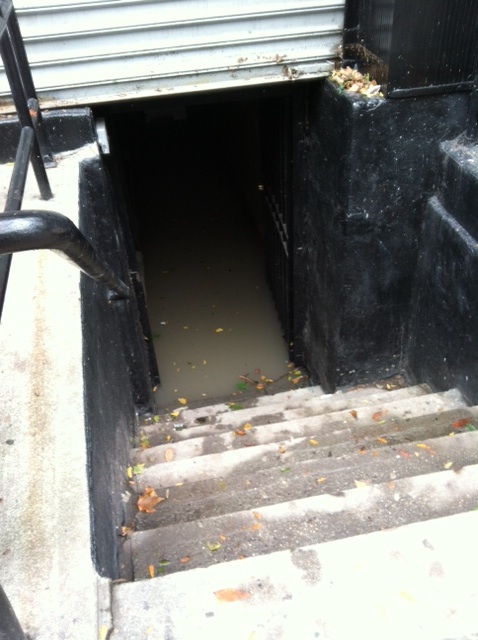 One of many flooded basements on Loisaida Ave

Weeping Willow broken Jardin del Paraiso. A pair of squirrels lost their nest and spent the day running up and down the tree very confused.

I take out the dogs and it is a little scary because the building’s hallway emergency lights that were so reassuring last night have run out of juice now and the stairs are pitch dark and the hallway out to the street is dark and so is the view to the street which is the most unsettling of all. The sidewalks are covered in wet matted weeping willow branches. The male dog Lolo is delighted with the plethora of fallen branches to mark while the little blind dog Millie is surprised at feeling greenery under her paws instead of the concrete sidewalk that she has mapped out so well.

Communication is bad. Those of us trying to conserve our battery power while trying to get information, must listen to radio stations reporting human interest stories and broadcasting commercials. I actually heard a story about a woman in New Jersey who drove around for 2 hours looking for a gas station. Really? The city’s twitter feeds are full of back patting and political pandering and obvious information such as the fact that the schools are closed. Wake up NYC and take a lesson from the towns upstate who brought their affected people portable power for charging their phones, wifi and dry ice.

2 thoughts on “hurricane sandy in loisaida”